‘Wrapped up in a Union Jack’: Brexit, (Northern) Ireland, and the United Kingdom in Medbh McGuckian’s ‘Kepler 452B’

This week, Dr Dawn Miranda Sherratt-Bado analyses Medbh McGuckian’s 2017 poem ‘Kepler 452B.’ Dawn reflects on its representation of the UK and (Northern) Ireland in light of Brexit, the 1916 centenary, and the 20th anniversary of the Good Friday/Belfast Agreement. Tweet her @drdawnmiranda with your thoughts.

Much has been written about the obliquity of Belfast-born poet Medbh McGuckian’s work. However, her writing is subtended by a discernible political undercurrent. In particular, it exhibits a preoccupation with how politics unfold within the patterns of history. McGuckian’s poetry interrupts the seemingly inexorable telos of History via her idiosyncratic patterns of language and imagery. These patterns include recurrent symbolism which can be traced throughout her poetic oeuvre. As Leontia Flynn and others note, colour and natural imagery, as well as religious and artistic iconography, make up McGuckian’s symbolic lexicon.[1] McGuckian’s techniques of juxtaposition, syntactic fragmentation, repetition, and subversion of traditional symbolic imagery, in addition to her use of found sources, are forms of play which destabilise linguistic and visual representation. 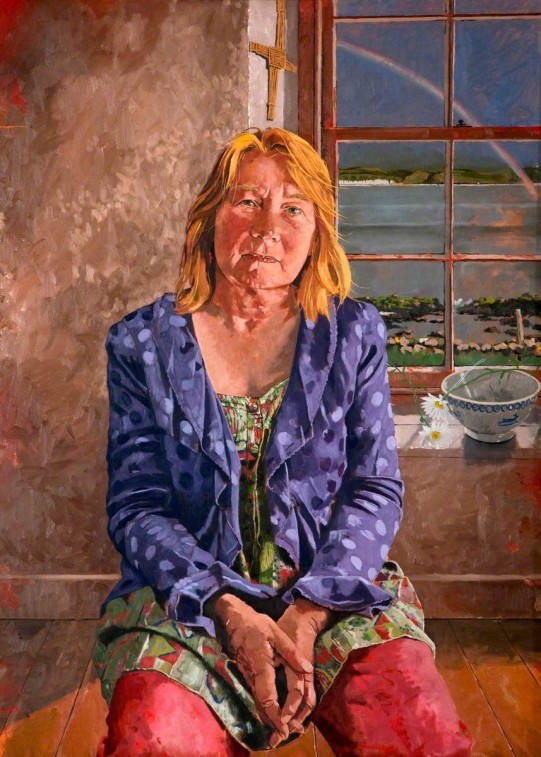 Her 2017 poem ‘Kepler 452B’ references the eponymous exoplanet discovered in 2015 (also called Coruscant by NASA). The Earth-like planet exists in another solar system and circles the sun-like star 452. This has earned it the nickname ‘Earth 2.0’, and in McGuckian’s poem the planet evokes notions of life in an alternate dimension, or starting over in this one.[2]

I will examine how ‘Kepler 452B’ utilises the imagery of a solar system to dislocate the sign system of the ‘United Kingdom’ and to unsettle (Northern) Ireland’s place within this configuration. This method demonstrates McGuckian’s fusion of poetical and political consciousness within her writing as a means to engage with the intricacies of contested histories and national narratives.

This month marks the twentieth anniversary of the Good Friday/Belfast Agreement, which purportedly ‘ended’ the Troubles. However, the Brexit crisis has exposed the fragility of the relative peace due to pressing concerns about the Irish border and Northern Ireland’s status (or lack thereof) in the ongoing negotiations. The British nationalist ‘rebellion’ that was the Brexit vote occurred in 2016, thereby coinciding with the centenary of the 1916 insurrection in Ireland, and the irony of this fact is not lost on McGuckian. As the speaker of her poem remarks,

‘Not long ago / we exited a century, like prisoners of a language / learned against our will – now every thing breathes 2016.’

The Easter Rising led to the Anglo-Irish War, and subsequently to the partitioning of the island. The Six Counties remained yoked to Britain and were cut off from the rest of Ireland. Now, nearly one hundred years later, Brexit threatens to harden this frontier. Despite Northern Ireland’s majority vote to remain in the EU, Britain seeks to drag it out, further removing it politically and ideologically from the Republic of Ireland and the rest of Europe.

In ‘Kepler 452B,’ this strange concurrence of historical moments collapses and compresses time and space. McGuckian figures Ireland as a terrestrial body circling the ‘sun’ of Britain. The poet redeploys the image of the sun, which ‘never set’ on the British Empire when it was at its zenith, in her vision of the birth of (Northern) Ireland. The speaker states,

‘I had ridden / wrapped up in a Union Jack to protect me / from the sun, and when I rolled out of it, / I felt that I was born.’

This (re)birth is a polysemic image, for it simultaneously references the birth of the Republic and that of Northern Ireland.

McGuckian contrasts the harsh glare of the imperial ‘sun’ with the soft lustre of the ‘moon,’ as a ‘sudden frosting of moonmilk’ glimmers over the unnamed city. She writes:

I should re-insert the moon into the narrative

of the war. In fact, I felt like a bonfire,

full of dull smoke, as if I were treading

the rim of a wheel burning a string

hundred candles fluttered towards the street.

Her poem ‘re-inserts’ the feminine creative vision traditionally associated with the moon ‘into the narrative / of the war.’ Pale moonlight adumbrates the poem’s landscape, rendering its terrain ambiguous. ‘The war’ is both the Anglo-Irish War and the Troubles. The ‘city of expired fanaticisms’ which is the setting of the poem is at once Dublin and Belfast, and it is peopled by ‘scarecrow troops…young soldiers everywhere.’

McGuckian juxtaposes these young fighting men with the feminine persona of the speaker, a maternal figure who observes how the conflict reverberates within her domestic space: ‘the children were / especially quiet.’ The speaker is also a writer and she recounts,

‘my notebook was snatched / from my hand, they didn’t like the look of it, / sniffed at, shaken, thumped hard, held upside / down. I was pretending to be a ghost.’

The latter statement implies that her choice to write is a dangerous act in wartime; hence it must be kept secret from those who would not ‘like the look of it.’ However, it is unclear which side ‘they’ are on.

The poem is permeated by death – ‘several hundred’ votive candles drip ‘blood’ onto the street – and yet it is also the site of a creative act. The demiurgic form of poetry constructs an alternate universe whereby the writer/speaker casts ‘the colour of moonlight’ on its object, enabling her to see it afresh. In the opening stanza, she observes:

Numbers are useless in counting anything

knotted in the shape of a rose. There is only

one universe at a time, the one real world.

Earlier on, when we were simpler than we are

now, is soaked through and through with time.

The roses spelled out one word – partner…

Here ‘numbers are useless in counting’ moments or years, as events from the past repeat within the present. The writer/speaker seeks escape to an alternate universe as a way to break out of this cycle; however, she recognises that ‘there is only…the one real world.’ The unreality of her surroundings prompts her to create another world within the poem, whose incantatory rhythm echoes that of prayer.

In ‘Kepler 452 B,’ the coercive ‘partnership’ of the ‘United Kingdom’ impinges upon the order of the natural realm, resulting in a dissonant music of the spheres. The writer/speaker contemplates these mysteries, ‘not knowing what my prayer should be.’ Her thoughts blur into abstraction as the situation grows increasingly unclear. Correspondingly, the poem’s patterns become unbalanced, overlaying time and space and projecting this image onto the screen of creative memory. The writer/speaker compresses the great expanse of History onto a palimpsestic page so that she may study it closely, ‘as if my hand had been…a raw telescope.’

In her poem, McGuckian addresses the significant historical events of the Anglo-Irish War and the Troubles in order to comment on the current political situation in 2016, which is paradoxically marked by the communal commemoration of the Easter Rising and by the divisive force of Brexit.

She contemplates the orbital recurrence of historical patterns as (Northern) Ireland continues to revolve around the false ‘sun’ of Britain. McGuckian ‘re-insert[s] the moon’ into the national narrative in order to disarticulate it; for the moon also exerts a gravitational pull, which is strongest when it is closest to Earth. The writer/speaker is ‘drawn by some need every evening to look / out to sea,’ as though measuring the moon’s proximity and, therefore, its power. The moon represents the creative force of poetic language, which counters that which is ‘learned against our will.’

McGuckian displaces the received narrative of the ‘United Kingdom’ by reworking its core/periphery model as a solar system. Her disjunctive mode of perception limns an alternate poetic universe which denaturalises the self-generated, self-replicating order of (neo)imperialism and its territorialising imperative. She dismantles teleological History, which occurs in linear time, by contrasting it with that of the cosmos – opening up infinite creative possibilities for rewriting and reimagining history.

Dr Dawn Miranda Sherratt-Bado is an academic and a dual specialist in Irish and Caribbean Studies. She is co-editor of Female Lines: New Writing by Women from Northern Ireland (New Island Books, 2017). Dawn has also published in Irish Studies Review, Breac, Callaloo, the Sunday Business Post, and Writing the Troubles. She is a regular contributor to The Honest Ulsterman, the Dublin Review of Books, and The Irish Times. Follow her on Twitter @drdawnmiranda.